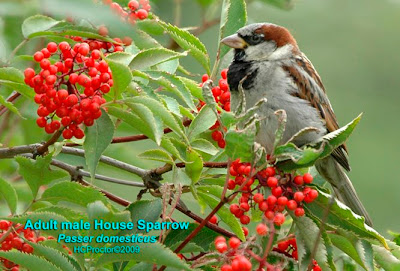 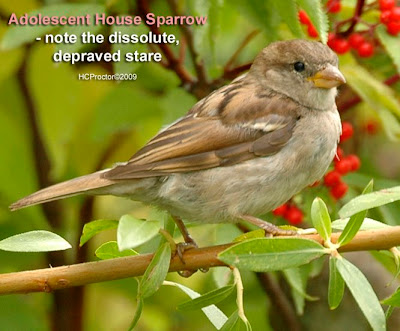 There comes a time in the course of a home bug gardener’s life when events call upon him to take up politically incorrect tools and use them to defend and preserve all he holds dear. Or to paraphrase Cato the Elder: Passer domesticus delendus est! I guess the exclamation point is un-Latin, but then so are periods, and my Latin muse assures me that the passive periphrastic agrees in gender and number with the object that ought to be destroyed. So, no matter what you think Cato said, don’t think delenda or delendum here, but 3rd declension masculine Passer, and IMHO, they all have to go.

Why, you might ask, would someone who claims to be gardening for biodiversity urge that a bird, the alpha and omega of biodiversity, ought to be destroyed? If you are a blue-birder or have a purple martin house, then I guess you already know the bloody murder that house sparrows (HOSP) wreak. If blood and bird bodies don’t bother you, examples of HOSP attacks can be found here. Remember - don't look if you can't stand the sight of bloody birds.

This morning we pulled a dead red-breasted nuthatch from the nest box where they have been relentlessly worried by the larger, alien, invasive, and thuggish HOSP. (I’m making no pretense at being a scientist this morning.) The opening to the box is (deliberately) too small for a house sparrow and all they can do is get their head in far enough to peck. They can’t possibly use the nest box, but being bird-brained, I don’t expect they care. And that’s not all! The bloody HOSPs ate my peas! AHHH! What is a bird introduced to eat insect pests doing eating my garden plants? Bloody bad biology is what. Shades of the cane toad, the HOSP eats few insects and feeds mostly on seeds and plants! 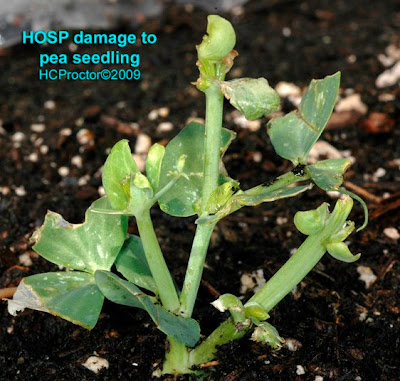 What to do? You probably need a permit to even look at a bird with murderous intent, let alone wring its neck. Ha! Unfortunately for the HOSP, in Alberta they are considered invasive pests, and the Province offers lots of permit-free advice on how to reduce their populations. Firing off shotguns within city limits and spreading poisons aren’t among the things one can do, but trapping is encouraged. Well, more or less. According to Chris Fisher & John Acorn’s “Birds of Alberta”, HOSPs arrived here in 1898 and “People with a dislike for this introduced ‘avian mouse’ go to amazing lengths to combat the species, but House Sparrows are here to stay.” And that certainly seems to be true – it’s hard to find a block in the City where you can’t hear their constant cheaping. It's enough to make you want to squeeze them until their eyes pop out. 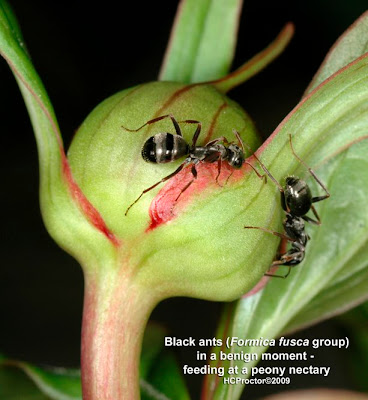 And then there are all the other maleficent pests scourging the garden. Formica fusca delenda est! Based on the number of people in Edmonton who whiten the ant mounds in their lawns with boric acid, I suspect the opinion that the black ant must be destroyed is widely held. Since I have no truck with lawns, though, I’ve held them no animosity. After all, ants really are extraordinary superorganisms, industrious, and often fun to watch. These particular ants appear to belong to the Formica fusca group and they can mess up my tiny patches of lawn all they want – but if they want to hang out in my garden, then they’d better be polite. This year they have been extraordinarily rude and their tunneling has already killed a purple sage and a hens-and-chicks and severely damaged a shrub cinquefoil. I tried soaking them with the hose to encourage them to move to a drier site. That does work sometimes, but not this year – a shovel and Dr Doom were required. That made me feel bad, but not so bad when I started looking around at all the collusion between aphids and ants.

Leaf miners, caterpillars, sawflies, spittlebugs, they are all bad, but there are aphids on everything! Aphididae delendae sunt!

A Gallery of Aphid Destruction 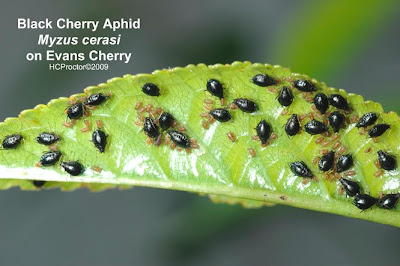 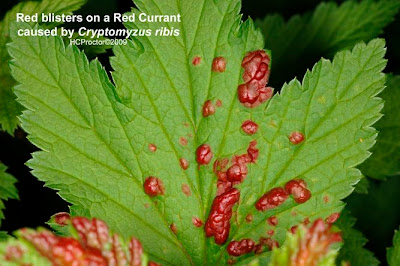 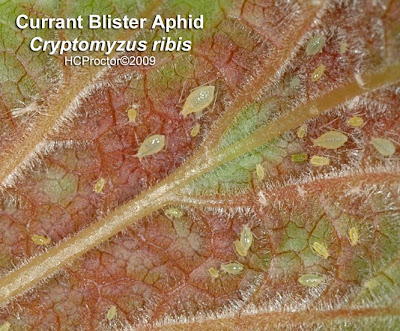 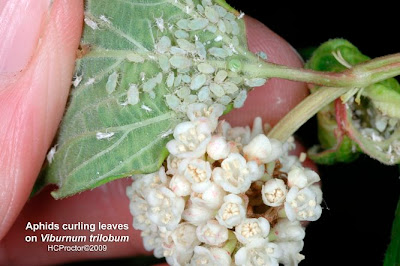 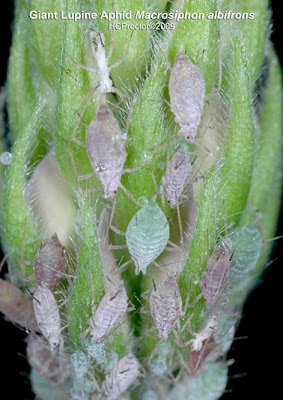 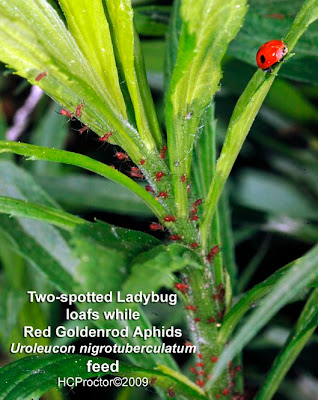 I agree with Gardening Zone 3b – where are the ladybugs and lacewings when you need them? 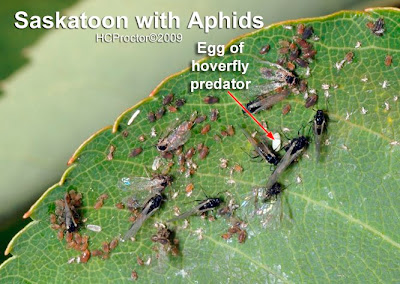 The natural enemies are out there, but I guess they don't like the cold wet weather any more than we do. Slowly they are coming on. 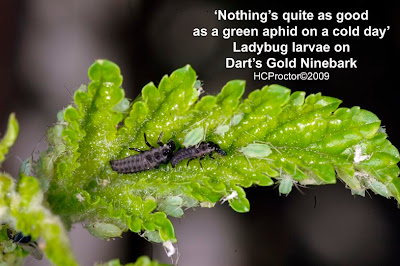 To paraphrase Betty Davis, there comes a time in every gardener's life when the only thing that helps is a glass of champagne. A couple hours with the squirt bottle of soapy water will have to come first though.
Posted by HomeBugGardener at 4:46 PM 2 comments:

Beware the Lord of Flies: Behold the Antipollinator! 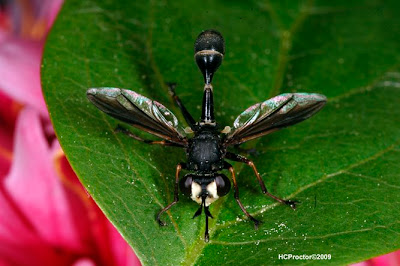 Although bees and wasps (excluding hornets) are all that is industrious and good in a Home Bug Garden, not every insect is as honest about its identity or intentions. This very waspy looking fly is a bad example. 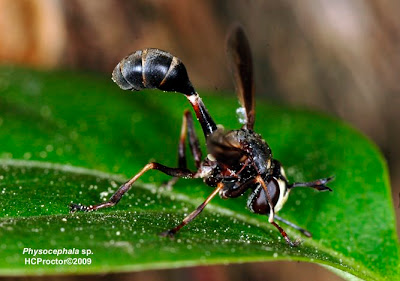 Far from being a friendly wasp, this demon from the fires below is a killer of pollinators: a Thick-headed Fly (Diptera: Conopidae: Physocephala sp.). In his book Insects, their natural history and diversity, Steve Marshall refers to conopids and their relatives as ‘Killer acalyptrates’ and with unholy delight describes how “bumblebees visiting flowers on a sunny day” are attacked by these “dipterous divebombers”. These depraved dipterons attack bees and wasps in flight, not to feed on them directly, but to leave behind an egg that will hatch into a parasitic maggot that will eat them alive from the inside out. No wonder Beelzebub is called the Lord of the Flies! 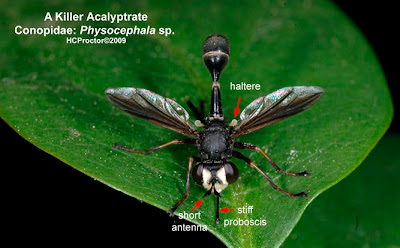 Take the time to look at this imposter closely and its infernal flyness will jump out at you. Bees and wasps have two pairs of wings, but Di-ptera have only two functional wings. The rear wings are modified into organs called halteres that help them maintain their balance when executing the sharp turns that allow them to make food of bees in flight (or feed on our blood or deposit eggs where we don’t want to know). Then there is the fixed proboscis that looks rather like the stabbing mouth of a tsetse fly, rather than the flexible tongue of bees. Finally, there are the devil-like horns instead of the graceful multi-segmented antennae of bees and wasps.

If these flies were attacking the queens of the yellow jackets and bald-faced hornets that were so common this Spring, then I would cheer them on. Every dead queen hornet is one less hive and many dozens fewer hornets at the barbie. Alas, according to Marshall, species of Physocephala are known to be parasitoids (the technical term for an insect parasite that kills its host) of honeybees and bumblebees. Let’s be bunt – they hate your flowers, fruit, and vegetables. Isn’t that always the way? All the really interesting bugs that show up are doing things you’d really rather they didn’t and not doing the things that you’d like done. 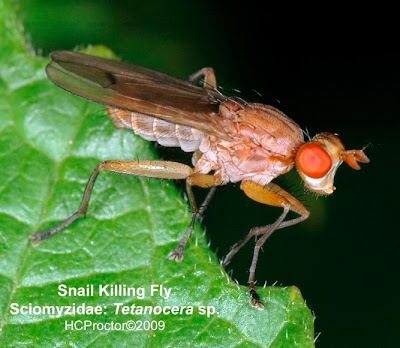 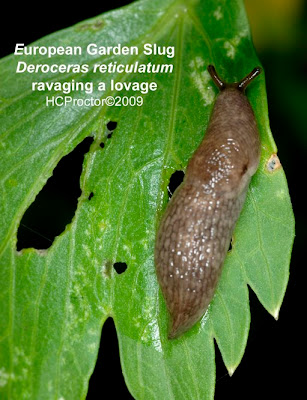 Here’s another other example of a killer fly – one that looks much more like a fly. Well, let’s be fair – it’s a bloody good-looking bug. Steve Marshall refers to these sciomyzid flies as “Snail killers”. Rather than tormenting useful pollinators, their maggots devote their deplorable de gustibus to mollusks. Well and good if only they were attacking the introduced, alien, destructors in the genus Deroceras – the totally without merit and abominable European Garden Slug. Given the current (and much appreciated) relatively wet June, these buggers will be on the slime march.

Alas, this sciomyzid is most likely interested in the harmless, even useful, aquatic lymaeid snails (see Marshall p. 417) that help keep the algae in our pond more or less in control. Does Nature really care anything at all about its balance in my garden? Of course not! What a bloody stupid question to ask. Am I the only too credulous gardener? I wonder how the Obama vegetable garden is going – forget the lead, what about the bugs? If it turns out the Secret Service is doing some late night pesticide appilcations, I may have to have a rant. Oh, who am I kidding? My first true rant is almost written. 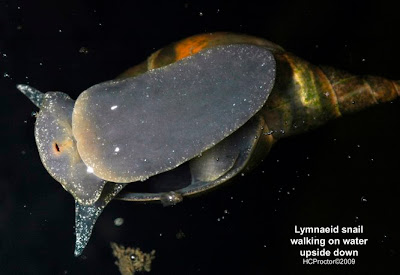 Posted by HomeBugGardener at 9:53 PM 2 comments: