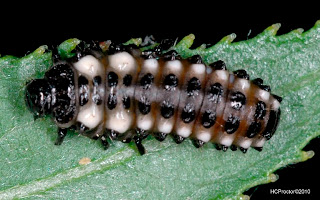 For those of you who like beetles, the inaugural issue of the first beetle blog carinval is up at
An Inordinate Fondness
Posted by HomeBugGardener at 8:22 AM 1 comment: 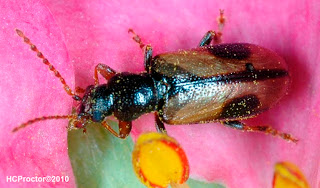 Conformity and Bug Gardening just don’t seem to get along. To take a case in point, whatever Haldane may or may not have said about the nature of the Creator, I could not support an inordinate fondness for beetles in the Home Bug Garden (HBG). Of the 339 species of animals that I have recorded, only 28 are beetles, like the mysterious chrysomelid helping itself to pink panda pollen above. Even considering just the arthropods (277 species), that is only about 10% of the garden honour role. Almost twice as many (49 species) Hymenoptera (ants, bees, wasps, sawflies) are known to pollinate, hunt, herd aphids, and chew (sawflies) their way through my garden and more than twice as many species (64) of flies (Diptera) have been identified. Of course, I do have a friend who is a specialist in both wasps and flies, and in general, estimates of diversity tend to be positively correlated with available expertise. 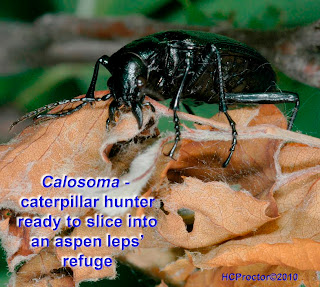 Then again, the Creator may have an inordinate fondness for people who work on beetles, since I seem to know a slough of them, most of whom muck around with just one family. Like most of Creation, beetles can be good, bad or indifferent in terms of their effects on human welfare, but one particular family, the Carabidae (ground beetles) is usually considered good. Thus, knowing there are somewhere between 30,000-40,000 species of them known from around the World is encouraging. It is true that a few groups eat seeds, but most that have been studied are ravenous predators of insects, worms, or mollusks. In general most people tend to think of bugs that eat other bugs as being good, and I hold an especially high level of approbation for anything that eats slugs. The tiger beetles (Cicindelitae), variously in and out of the Carabidae and currently a sort of supertribe within (see Beetles in the Bush), are possibly the most colourful and energetic of ground beetles in the broad sense. Many other tribes, however, may show spectacular and brilliant metallic hues (see former Albertan David Maddisson Tree of Life page and the links therein). Your everyday ground beetle, though, is on the dark and dowdy side. About 930 of these mostly not colourful species are known from Canada and too many of these to count are found in Alberta. Alas, again the Home Bug Garden seems to be having trouble conforming – not a single cicindelitine and only four species of rather understated ground beetles have been identified so far – and half of them are aliens. 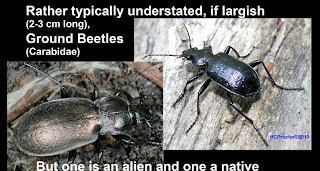 One of these alien invaders is the largest beetle that I have found in the HBG and one of the most common: Carabus nemoralis O.F. Müller, 1764. Carabus is the genus that gave us the family name Carabidae (root carab + family ending –idae). Opinions differ, but the word ‘carab’ may have come to us from Greek via the elision of an ‘s’ from ‘scarab’. Linnaeus himself proposed the genus Carabus in 1758 with O.F. Müller describing the species nemoralis (meaning ‘of the woodland’) only 6 years later. By 1870, this beetle had made its way to New Brunswick and is now transcontinental in Canada and the USA (Cardenas & Buddle 2007, Coleopterists Bulletin 61:135-142). According to George Ball (another Albertan and perhaps the World’s most famous carabophile) in Ross Arnett’s Beetles of the United States (1971), C. nemoralis is introduced and synanthropic – i.e. ‘united with man’. George’s opinion on this beetle may, perhaps, be apparent in his comment: “This species is common about human habitations, and in the spring of the year, dead, squashed specimens are frequently seen on sidewalks.” 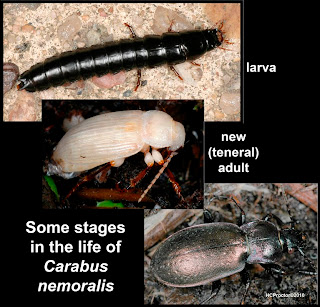 Although beetles squashed on sidewalks may be the more public view of C. nemoralis, its private life has been the subject of much scientific research. A search of BIOSIS (a scientific abstracting service) produces 131 scientific papers that discuss Carabus nemoralis. Many of these are about its distributional ecology in forests and fields in Europe. In one of these papers (“Effects of automobile traffic on the sex structure of beetle populations (Coleoptera, Carabidae) in strawberry agricultural communities” 1992, Biologicheskie Nauk 1: 86-92), R.O. Butovskii found that “It is possible to conclude, that… [C. nemoralis] …are more sensitive to the motor transport and had more mobile sex structure”. I guess sidewalks aren’t the only crossings dangerous to this beetle. Then there is the good and bad news from the Canadian cornfields. BMJ Tyler and CR Ellis (1979, Proc. Entomol. Soc. Ont. 110: 65-74) found that C. nemoralis “became radioactive when confined in similar free choice cages with rootworm eggs labelled with [radioactive iodine].” I suppose fewer corn rootworms is good, but radioactive beetles? We know what that can do to ants!Perhaps this explains the title of a paper by Lise Ann Libungan and her colleagues: “The ground beetle Carabus nemoralis - the biggest beetle in Iceland” (2008, Natturufraedingurinn 77: 15-18). 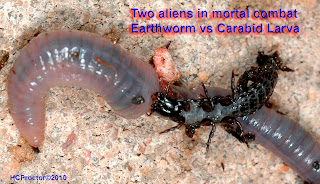 Whatever its relative size, Carabus nemoralis is now as permanent a member of the North American (and apparently the Icelandic) fauna as we are. Is this good or bad? Well, another Albertan with a predilection for ground beetles, Scott Digweed (1994, Coleopterists Bulletin 48:361-369), found that “Adults of Carabus nemoralis Mueller… were tested for orientation to mucus trails of the slug Deroceras reticulatum (Muller) and earthworms using an X-shaped orientation chamber. In early June, C. nemoralis females oriented to both slug and earthworm mucus, whereas males only oriented to earthworm mucus.” Well, no accounting for taste, whatever one's gender, but given the number of worm carcasses littering walks and roads after rains, one wonders if this interest in earthworm mucus may help explain George Ball’s and R.O. Butovskii’s observations? Nature does tend to be wasteful, but we must remember that both Carabus nemoralis and the worms (and the evil slugs) are ‘invasive’ species. Perhaps I should be adding my foot to the gauntlet? 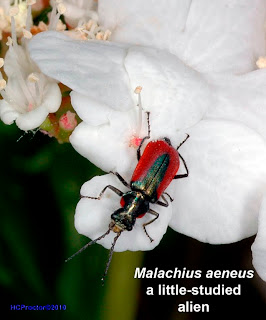 Before I become a carabicide, let’s consider an invader that I just can’t bring myself to squish: the Scarlet Malachite Beetle (Malachius aeneus). Malachite, no doubt, from the iridescent green of the copper ore and Scarlet for the contrasting brilliant reds. One reason for not squishing this beetle is the colours - they look aposematic to me and mean this beetle may be on the toxic side. But since I don't intend to eat it, what is not to like? Adrian Thysse at Gardening Zone 3b has recently reviewed the biology and the interesting conundrum about this pollen-feeding beetle: in short, it is endangered in Europe, but thriving in North America. But do we really want even an attractive alien invader here? Especially, since the chapter on this family (Soft-winged Flower Beetles, Melyridae) in Arnett’s book (p. 608) reports: “One species, Malachius aeneus (L.), has been introduced to this country and causes considerable unrecognized damage to developing wheat in the Mid-west.” 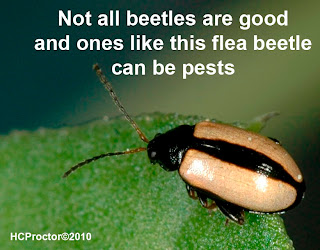 Well, another pest of wheat is certainly something we don’t need in Alberta, and the Scarlet Malachite also has a predilection for canola flowers. ‘[C]onsiderable’ and ‘unrecognized’ damage - yikes, sounds insidious! It also sounds a bit contradictory. Well, I claim to be a scientist, so what are the facts? Alas, neither BIOSIS nor CAB Abstracts (an agricultural science database) came up with more than a dozen papers on Malachius aeneus. That seems unlikely for a significant pest and what little information is available from these papers suggests that, although some flowers are damaged, the Scarlet Malachite is most likely beneficial to agriculture. Studies in Sweden (Vaxtskyddsnotiser 45: 146-154), Russia (Entomologicheskoe Obozrenie 59: 535-543; Zashchita Rastenii 10: 44-45), and Poland (Ekologia polska 11: 295-305), all report that the Scarlet Malachite is a useful predator of pests in rapeseed crops (relatives of canola) and wheat, especially of pest aphids, thrips, and beetles. Among the beetles eaten is the very similarly named Meligethes aeneus F (perhaps there has been some confusion over here about who has been eating what). This member of the family Nitidulidae also feeds on pollen, in fact it is called the Pollen Beetle, but it also eats the whole flower and does significant damage to cruciferous crops (and Cab Abstracts lists 669 papers to support this statement). Perhaps it is a good thing that the Scarlet Malachite is in Alberta and is doing so well here. Too bad it seems to lack the good taste to eat slugs
Posted by HomeBugGardener at 7:11 PM No comments: