Sawfly Sunday: On the Importance of Prolegs 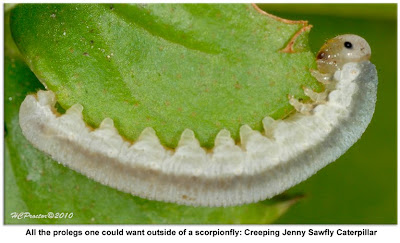 As well as the three pairs of jointed legs on their thoraces, some immature insects have additional grasping/ambulatory organs on their abdomens called prolegs. In this case ‘pro-‘ seems to be used in its ‘before in time’ mode. Perhaps whoever coined this term in the early 1800s thought these fleshy lobes were the precursors of true legs, as some think of the lobopods in modern velvet worms. On the other hand, the OED states ‘prop-leg’ as an alternative, so perhaps proleg results from an elision. In any case, the number of pairs of fleshy abdominal prolegs is a good character for distinguishing those butterfly and moth caterpillars that feed on the surfaces of plants from those of sawflies. 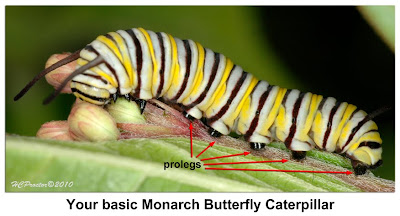 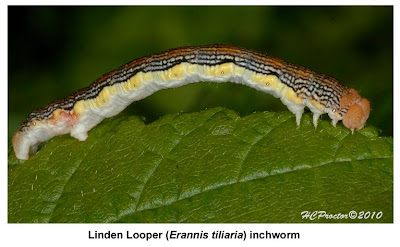 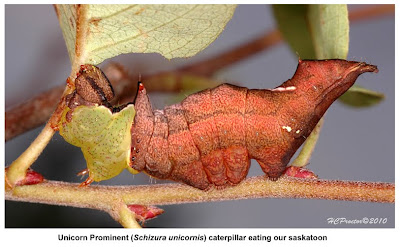 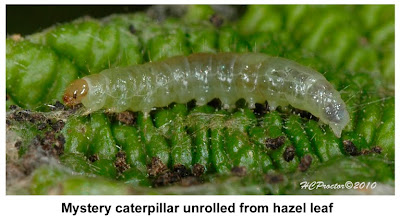 Of course, to count the number of prolegs it helps to see them. This is a special problem in a picture and a good example of why it helps to have an idea of what the important identification characters are before one takes a picture. If you have the disk space, it is also an excuse to hold on to those poorly framed or out-of-focus shots that may have useful information for identification. 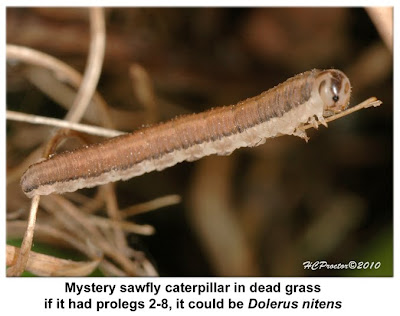 The picture above is of a sawfly caterpillar – I know it from the shape of the head capsule and the general Gestalt (I was an entomologist for many years and some of it still sticks with me) - but how many prolegs does it have? At BugGuide, Dave Smith points out that most of the grass-feeding sawflies in North America belong to one of two genera: Dolerus and Pachynematus. Larvae of the former have an asymmetrical labrum and prolegs on segment-8; the latter have a symmetrical labrum and no prolegs on segment-8. Alas, neither the labrum nor the prolegs are visible and this id is stuck at my doleful level of Gestalt.
Posted by HomeBugGardener at 3:33 PM

Email ThisBlogThis!Share to TwitterShare to FacebookShare to Pinterest
Labels: sawfly