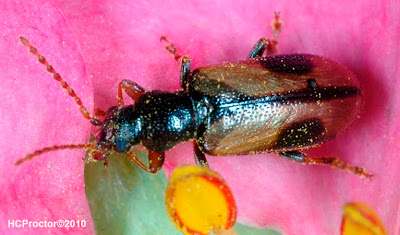 Reputedly, the Vernal Equinox is tonight at 23:21 UTC or 11:21 PM Universal Time Coordinated, or Greenwich Mean Time if you aren’t a universalist. I’m an Albertan at the moment, so I take it to be about 3 hours from now at 5:21 PM Mountain Daylight Savings Time on the day after the ‘super’ full moon. Perhaps I’m wrong – only clouds and snow fill the sky at the moment: no sign of spring nor of super moons nor of spring bugs. Alas, without bug blogs I wouldn’t be seeing any bugs at all.
But bug blogs are more than just for bug perving, they also can be educational and in this particular rumination I will be surprised, embarrassed, philosophical, historical, avoiding guillotines, becoming mired in nomenclatorial confusion, and dying around mastodons in my search for the truth. It all began with the latest Inordinate Fondness beetle blog carnival at Wanderin Weeta’s where what should I see but a mystery Home Bug Garden (HBG) beetle! Forget the snow, a Canada Day reminiscence by the BugWhisper himself led to my surprise – and also my embarrassment. My one and only submission to Inordinate Fondness, one bugless and miserable day in February 2010, turns out to be disgraced by a “mystery chrysomelid” that is neither mysterious nor a chrysomelid. What we have is a failure to recognize Orsodacne atra (Aherns, 1810), currently placed in the family Orsodacnidae (Ravenous Leaf Beetles). 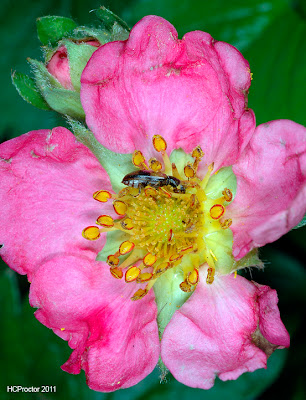 Getting a family wrong is always embarrassing, but learning a hypothesis is false is the best way forward in science. I’ve been a scientist for a long time and long ago got used to being wrong and having to pick myself up and start all over again. In this particular case, however, I seem to have slipped on a long and illustrious trail of coleopterous confusion.
To me (and others), Orsodacne has the gestalt of a Chrysomelidae (Leaf Beetles), and indeed that is where beetle-lucky Pierre André Latreille gave birth to the genus in 1802. Allegedly, Latreille had good reason to love beetles, since his coleopterophily saved him from the guillotine (see Wikipedia link). Since he also established the family group name Chrysomelidae in 1802, this would seem to be definitive and I should be embarrassed no longer. Thomson in 1859, however, decided a new family, Orsodacnidae, was needed for these peculiar beetles. Since then the splitters and the lumpers have tugged the ravenous leaf beetles back and forth between the families. This may be more than just taxonomic egos, because Orsodacne has all the characteristics of a basal member of the chrysomelid lineage (e.g. see Mann & Crowson 1981 - citation added) and its proper placement is not all that clear.
Confusion does not end there, however. Unfortunately, these beetles tend to be variable in colour pattern. For example, Steve Marshall in his Insects (p. 351) states without compromise: “Orsodacne atra, the only northeastern orsodacnid, has several color forms which have been erroneously treated as different species. At least 11 different species names have been given this species, of which only the oldest (O. atra), is correct. The other names are junior synonyms.”
So, now at least we know the right name for our beetle: Orsodacne atra (Ahrens, 1810)! Or do we – half the references I found use Orsodacne atra (Knoch in Ahrens, 1810). This would seem to imply that someone named Knoch (possibly the German naturalist August Wilhelm Knoch who died in 1818) actually deserves credit for the name and not the German entomologist August Ahrens (1779–1867)?  This is getting way beyond my level of nomenclatorial expertise, s [Having acquired a higher level of nomenclatorial knowledge since first posting, I can say (Ahrens, 1810) is wrong, (Knoch, 1810) correct, and (Knoch in Ahrens, 1810) the most useful authority citation.] So I think I’ll just be glad that the genus is clear and stable.
But is it – NO! Apparently the species that Latrielle designated as the type for Orsodacne is not all that clear either. Although he tried to remedy the problem in 1810 by designating Chrysomela cerasi Linnaeus, 1758, as the type species, this is somewhat irregular under the rules of nomenclature. Thus, in 2000 H. Silfverberg felt it necessary to appeal to the International Commission on Zoological Nomenclature (Case 3103) to conserve Latrielle’s designation. Fortunately for us, two years later the ICZN agreed (Opinion 1989). 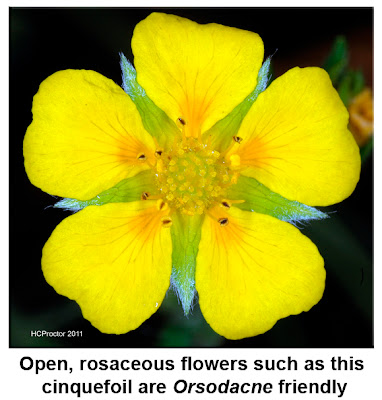 So, at last we have a more or less stable name – but what does this beetle do? Silfverberg’s (2000) application states “Species of Orsodacne are pests on cultivated plants”. From the name of the type species (cerasi) I think it safe to assume that the adults or larvae or both feed on cherry, but finding information on the feeding of any Orsodacne in the scientific literature seems to be difficult. If they are a pest, then they must be minor ones, because the sad fact is that the more an insect impacts on humans, the more scientists study it. 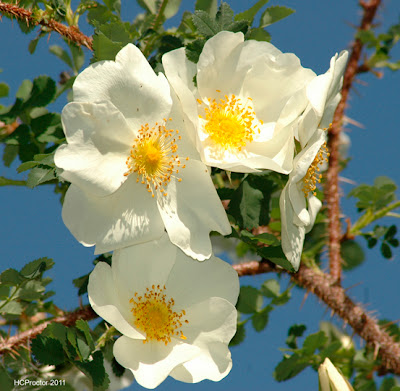 Can we say anything about O. atra? Well, the HBG beetles were ravenously eating pink panda pollen. Pink panda is a hybrid between a strawberry and a cinquefoil, both members of the Rosaceae. Insects of Alberta reports that adults of this beetle also feed on a member of the Rosaceae, the Provincial Flower the wildrose (usually interpreted as Rosa acicularis), and on the pollen of other woody plants. Barrett & Helenurm (1987) report this beetle common on bunchberry (Cornus canadensis) (below). 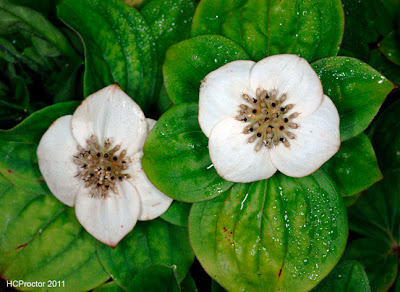 That was all I could glean from a fairly extensive search of the primary scientific literature and unfortunately that leaves us in the dark about the larval habits. Insects of Alberta reports “Little is known about the larval stages” and this seems to be true. So, a mystery – but the solution comes from an unexpected source - paleoentomology. Thanks to the Geological Society abstracts of Robert E Nelson and his colleagues that are available on the web we can add the knowledge that adult O. atra used to hang around with mastodons in New York and on the coast of Maine about 11,000 years ago – and also that the larvae feed on willow (Salix spp.). So, with lots of flowers in the Rosaceae (like the white Scotch Rose above) and Cornaceae, and a large and rapidly growing willow, there no real mystery as to why this beetle has taken up residence in the Home Bug Garden. However, I do still wonder why it is called a Ravenous Leaf Beetle and not a Ravenous Flower Beetle? 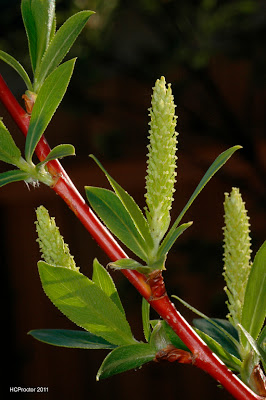 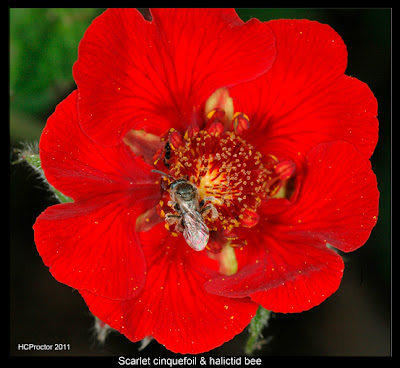 Posted by HomeBugGardener at 2:39 PM

Email ThisBlogThis!Share to TwitterShare to FacebookShare to Pinterest
Labels: beetles